The Dairy Man and I aren’t the kind of couple that celebrates every little relationship milestone. We don’t exchange gifts or Facebook statuses to commemorate things like “the day we first kissed,” “the day we went on our first date,” “the day we said I love you” (though I can remember the circumstances), or “the day we first ate pizza together.”

Who has time to remember every little thing? When you’ve been friends for five years, dating for four, and married for one and a half(ish), who has time to recognize each wonderful first? Not us. We’ve got blogs to write, cows to milk, you know the drill. That’s not to say we don’t like to reminisce about that first date, that first kiss, that first slice of pizza (just kidding). We love to look back on our history and savor those little moments. But we don’t have enough space in our brains to remember to celebrate our first jog together.

That being said, today is one date I’ll always remember. In 20 years, it won’t rise to the height of our wedding day or the day we have our first child, but it will be a date I won’t forget.

What’s today you ask? Well, it was exactly two years ago that my bashful Dairy Man knelt down on one knee and asked me to marry him. It was undoubtedly one of the most pivotal days of my life. This day marks the moment I fully committed to farm life, to Michigan, to him. It’s also the day I got to start wearing something sparkly and practice writing “Mrs. Folkema.”

It was Tuesday, December 22, 2009. I had just returned to my apartment after my last day of work before the holidays. The Dairy Man had called from his home (an hour away) and said that he was going to drive down to make me dinner. Which, frankly, was suspicious. But I did what all girls who helped pick out their rings do—I played dumb and waited. The Dairy Man showed up with grocery bags, candles, a tablecloth, and a bottle of wine. We chatted awkwardly while he cooked up some shrimp tortellini (what I ordered on our first date) and sat down to dinner.

After dinner, he suggested we head downtown to go ice skating. When we parked, he said, “I’ve got something for you in the back of the truck.” Wouldn’t you know it: two brand new pairs of ice skates! We carried our skates to the steps of the Grand Rapids Art Museum and sat down to lace them up. Strangely, the Dairy Man wanted me to put mine on first. He handed me a skate** and hovered over me while I put it on.

DM: (Shifting from foot to foot) “Uhhh I will in a second. Ready for the other skate?”

As I pushed my foot into the second skate, I felt something hard in the toe. I pulled out a ring box and wahBAM Dairy Man was down on one knee.

And then there was some light and joyful snogging.

Unbeknownst to me, a friend had popped out from behind the building when DM’s knee hit the ground and started taking pictures of the whole thing. I treasure these pictures. I still remember the elation, the love, the hope of that moment. I also wish I hadn’t tucked my pants into my argyle socks, but what can you do?

**In regards to the awkward hovering? Later, the Dairy Man mused: “If I had been thinking, I would have handed you the skate with the ring in it FIRST, not second.”

I remember telling a friend a few weeks prior that I really hoped the Dairy Man didn’t propose on Christmas. It was too cliché, it wasn’t us. Rather, I said, “I just really want him to propose on some random Tuesday!” And it was. The Tuesday before Christmas. My man knows me well. 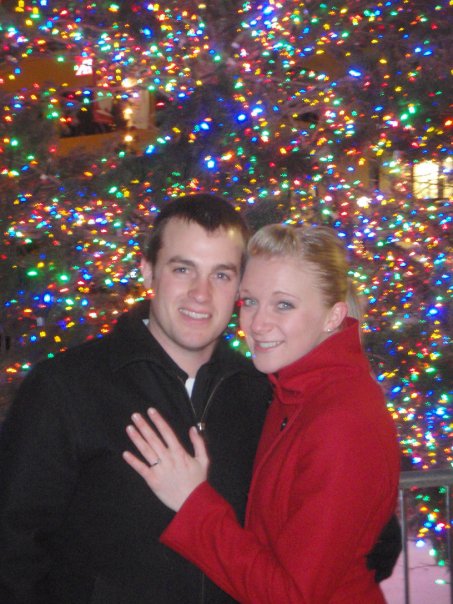 Two years later, these recollections still cause my breath to catch in my chest. It’s easy to get swept up in the normalcy of work, marriage, no-longer-pending adulthood. But today I will look at my Dairy Man and remember those two bright-eyed kids, shivering in the cold, agreeing to start a life together.

And really, somewhere in the distant hills that night, I think the cows agreed too.

4 thoughts on “I Talked to Your Dad, Go Pick Out a White Dress”

My favorite three 🖤
My family has been going on the same northern Michigan weekend for the past seven Octobers. We’ve grown and aged and gotten 150% louder (thanks to the addition of our little people), but what doesn’t change is the joy we have being together, the awe we feel to be in such a beautiful place, and the unapologetic regression to childhood levels of sugar consumption. So grateful for these people and this place.
Northern MI, you’re so dreamy
Pre-sunset magic at the lake ✨
I love them the most ❤️ #folkemafive
Fall found us. And, oh, is she glorious.